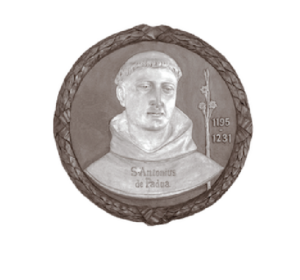 The Guild and its members serve God by supporting the Franciscans Friars in their work with the poor, the alienated, the homeless and the suffering. St. Anthony’s Guild is always striving to be an instrument of peace and an example of God’s love to all people.

St. Anthony’s Guild is dedicated to carrying on the teachings and mission of St. Francis of Assisi and St. Anthony of Padua. The Guild strives to promote the spiritual well-being of all its members, living and deceased, through prayers, Masses and Special Intentions. It helps educate priests and brothers in the Franciscan tradition so that they may go out into the world as St. Francis and St. Anthony

Saint Anthony: The Saint of The Whole World

Saint Anthony of Padua is without question one of the most popular of saints; popular enthusiasm has made him universally recognized. He is called the “Saint of the Whole World” because the faithful of the whole world love him. During the past eight hundred years, millions in every clime and land have been attracted to this great Franciscan Wonder-Worker. All classes, the rich and the poor, the renowned and the lowly, are drawn to him.

Artists and scholars, sculptors and authors without number, have dedicated their talents to him. Everywhere churches and chapels arise in his honor, and shrines and altars invite his trustful friends. Hardly a Catholic church is without his statue, a Catholic chapel without his image, a Catholic home without his picture. With the names of Mary and Joseph, the name of Anthony is invoked in almost every Catholic household with pious fervor and boundless confidence. “Thus,” says Cherance, “there arises from all parts a universal concert of homage and praise in which each succeeding generation has a share; and heaven itself adds its harmonious note by the multitudinous and constant flow of graces and miracles with which it had crowned the invocation of Saint Anthony in every age.”

No doubt it was this universal acclaim for the Wonder-Worker of Padua that prompted his great client, Pope Leo XIII, to utter those significant words: “Saint Anthony is not only the Saint of Padua, but in truth the Saint of the Whole World.” This enthusiastic devotion to Saint Anthony has gone on for eight hundred years and is not abating. Consequently, it seems quite natural to conclude that the “Saint of the Whole World” also has a special mission for the people of our time.

God is wonderful in His Saints,” but Anthony is the Saint of wonders. The marvelous power of miracles conferred upon him bu God has won for Saint Anthony throughout the entire world the name of Wonder-Worker. The Church in her ancient repository says of him, “If then you ask for miracles, go to Saint Anthony.” Saint Antonine, the Dominican Archbishop of Florence, calls him “the Wonder-Worker beyond compare.” And in the Holy Mass said on the feast day of the Saint we read: “In life, he wrought signs, in death miracles.” So numerous were the miracles wrought on the day of his burial that his funeral procession became a triumphal ovation, while the wonders obtained through his intercession after that brought about his canonization in less that a year by Pope Gregory IX. In the letter of canonization, this Sovereign Pontiff conferred upon Anthony the title, “Operator miraculorum carissime,” that is, “Dearest Wonder-Worker.” This was in the thirteenth century, and, from that time on uninterruptedly to our own day, the history of the Saint has abounded in extraordinary examples of favors bestowed upon those who have sought his intercession. The sorrowful and afflicted are never weary of imploring his aid, and Saint Anthony never wearies in obtaining their requests. His miracles are innumerable and almost infinitely varied: cripples have been cured, invalids healed, the dead brought back to life, temptations heroically overcome and especially, lost things restored. He has advanced the temporal and still more the spiritual interests of his devout clients to such as extent that the mere enumeration of the marvels and blessings obtained through him would fill volumes. Every day new facts are added to those already known, confirming the ancient and constant belief that Saint Anthony is a wonderful helper in ever necessity a Saint chosen by God as the instrument of His Almighty power and love; a friend in need and a consoler in affliction; “a Wonder-Worker beyond compare.” “Ask the Wonder-Worker with confidence,” says Saint Bonaventure, “and he will obtain what you seek.”

A Sketch of The Life of Saint Anthony

Saint Anthony was born in Lisbon, Portugal, on August 12, 1195. In baptism he received the name Ferdinand. His father was Martin de Bouillon of the renowned Bouillon family of Crusader fame. His mother was Teresa de Tavera, of an ancient and noble Portuguese line. After splendid training at home, Ferdinand was sent at the age of ten to the cathedral school conducted under the care of the clergy. When fifteen, he consecrated himself to the religious life in the convent of the Canons Regular of Saint Augustine at Lisbon. He was transferred thence to Holy Cross Monastery at Coimbra, where he achieved a great name for both sanctity and learning. It was here at Holy Cross that the young Canon Regular received his vocation to the Franciscan Order. When he saw the remains of the first five Franciscan martyrs of Morocco, which were brought to Coimbra for interment, Ferdinand was inflamed with an ardent desire for similar martyrdom and asked permission to join the sons of Saint Francis. In July of 1220 the new Franciscan received, with the habit of the Order, the name of Anthony, that name by which he is known and loved throughout the world. Four months later, at his own urgent request, Anthony was sent to Morocco, that he too might share in the honors of martyrdom. But God had decreed otherwise, and by means of sickness and shipwreck brought the martyr in desire to the land he was to glorify by his holy and miraculous life. For ten years Anthony traversed Italy and the southern part of France, going wherever obedience called him, to preach the Gospel of Christ with untiring zeal. He so successfully opposed the then prevailing heresies that he became known to all as the “Hammer of Heretics.” Because of his knowledge of the Sacred Scriptures, he was greeted by Pope Gregory IX as the ”Living Ark of the Testament.” Anthony’s fame was at its zenith when, in 1228, he was sent to Padua. Here he spent the last few years of his life, in the city with which his name has been associated for seven centuries. Death came to the Saint on Friday, June 13, 1231, in his thirty-sixth year, in the little hospital adjoining the convent of the Poor Clares of Arcella, outside the city gates of Padua. Fearing a dispute between popular factions for possession of the treasured body of the Saint, the Friars tried to keep the news of his death from the people, but the children ran through the streets of the city, crying aloud: “The Saint is dead! Our Father, Saint Anthony, is dead!” He was canonized by Pope Gregory IX on May 30, 1232, less than a year after his death. In the year 1263 the tomb of the Saint was opened in order that his blessed remains might be transferred to the new sanctuary built in his honor. The marvel was then discovered that, though his flesh had fallen to dust, his tongue remained fresh and ruddy like that of a living person. It was on this occasion that Saint Bonaventure, then Minister General of the Franciscan Order, taking the tongue of the Saint in his hands, uttered the words which now constitute the antiphon preceding the Miraculous Responsory: “O blessed that never ceased to praise God and always taught others to bless Him, now we plainly see how precious thou art in His sight!”

Support The Work
of The Franciscan Friars

Only with your support can we continue to serve over 2 million people each year with the basic necessities of food, clothing, shelter, medical assistance and counseling.